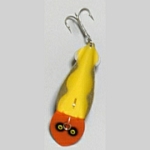 He is not a man who fishes in fancy clothes or from a plush, high-powered boat. If you ever met him on the water you would hardly know him because he wears no patches and doesn't display fancy decals that boast his accomplishments.

He never won a fishing tournament because he never fished in one. He doesn't have a TV show or a radio program, or a newspaper column. But Buck Perry has the keen, analytical mind of a fisherman trained in scientific principles, and who constantly asks "why?" and then seeks out the answer. Buck put his genius to work in the study of fishing, and today millions of anglers owe him thanks and tribute for his concept of structure fishing. Like a research scientist working quietly behind the scenes, Buck fished waters across North America and beyond to solve fishing problems. He answered many of the where, what, and why's of fishing. He is the true Father of Structure Fishing.

On July 10, 1915, Hickory, North Carolina recorded the birth of a son, Elwood L. to Robert M. Perry and Ollie Jones Perry. Robert M. Perry was a general contractor in Catawba County and a man who loved to fish. He soon discovered that little Elwood loved to fish too, and the two became inseparable fishing companions. He also quickly learned that little Elwood had an unusual mind that delved deeply into solving problems and was always asking "why?"

In March of 1928, Robert and Elwood were fishing a large Carolina mountain reservoir. By today's standards it was a virgin lake in every respect. It was loaded with fish, had no pollution, no other fishermen were on the lake, and water skiers had not yet been invented. The weather was clear, cool, and beautiful, with a refreshing breeze. But the fish weren't biting. Little Elwood startled his father with the comment, "You know, Dad, the deep water is the home of the fish." Dad just sort of rolled his eyes at his son and made another cast inches away from a half submerged tree root.

Several days later on the same water, again with no fish, Elwood startled his Dad with, "Not only is the deep water the home of the fish, but they move on PATHS toward the shallow water. How far they come and how long they stay is controlled by the weather and water conditions. Dad, we're not only fishing wrong, we're fishing in the wrong place."

This time dad did more than just roll his eyes. "If you don't stop making those crazy statements, I'm going to throw you in the lake!"

Later, Elwood would explain that he had been hearing the opinions of the so-called "fishing experts" and that no two were ever alike. Since there were so many different ideas floating around as to what made a fish tick, none of which would stand up to any scientific scrutiny, it was likely that none of them were right. That day Elwood decided he would have to make his own study of fishing, and he vowed never to say anything about fish or fishing that he had not personally observed.

Elwood had been looking into the water for a long time. Some days he would see scads of fish swimming around, but most of the time he saw very few or none at all. Since the fish were not very often in the shallow water, and they could not swim up into the woods and hide behind a tree, they obviously had to be someplace else. That place had to be deep water.

He also noticed that he would always see fish in the same shallow area, and would never see them in certain other shallow areas. Therefore the fish must be following some sort of path that led them to specific shallow water areas. Some days they showed up, other days not.

It was logical that since all other animals reacted to weather conditions, why should fish be any different just because they lived underwater? Since most fisherman were facing the shoreline to do their fishing, it became obvious that most of the time, most of the fish in the lake had to be behind them in deeper water. These were startling thoughts for a lad of only 13!

As Elwood grew, he gravitated into the study of science, math, chemistry and physics and graduated from Lenoir Rhyne College at Hickory, NC. He went on to graduate work at North Carolina State University. He had earned high school and college letters in baseball and football, but science was his love. Fishing was his passion.

In 1938, Elwood married Marjorie Stetzer, known affectionately to him as "Bud," and only her death from cancer 40 years later separated them.

To his friends and associates, he was known simply as "Buck." Hundreds of thousands of fishermen, the ones who studied fishing, would ultimately come to know his name as a great teacher of fishing.

Buck Perry taught high school physics and math in Hickory, NC and became an instructor in mechanical engineering at North Carolina State. During World War II he taught Diesel Engineering to Navy officers. In 1945 he joined the U.S. Army Transportation Corps and went to Europe in as a Lieutenant Colonel where he supervised the unloading and assembly of barges.

To find where the fish were and at what depth, trolling was the only efficient way to eliminate large expanses of water. Since no lure existed that would stay at a fixed depth regardless of speed of presentations, Buck had to invent one. Armed with tin snips and a pair of pliers he cut and shaped pieces metal until he had developed a lure that would do the job. Some say it resembled a shoe horn on which a horse had stepped. After he found the right size, shape and weight, he painted them in various colors. The lure was a cross between a spoon and a plug, so he named it "Spoonplug."

A Spoonplug was designed to find fish and make them strike. It was unique then, and remains unique today because it will run at a very specific depth regardless of how fast it is trolled or retrieved. Since a Spoonplug looked so weird, many thought that the concept of Spoonplugging was trolling Spoonplugs at high speed. Spoonplugging is the search for knowledge about fish, their habits, and how to successfully catch them.

And Spoonplugs caught fish from the start. At high speed on the troll or walking bottom on the cast. As proof of the Spoonplug's ability to catch non-feeding fish, Buck would dip a Spoonplug in gasoline and then go right out and catch a fish with it. His lure, presented at the proper depth and the proper speed provoked a strike, gasoline odor or not.

The fishing equipment at the time was largely unsuitable for use in efficient trolling. Fishing lines, designed for spinning equipment would bellow or "bow" out, stretching significantly when trolled. So, Buck invented a trolling line that had no stretch. He added marks of color every 10 yards so fishermen would know exactly how much line they let out on any given trolling pass. He called it "No-Bo" line."

Knowledge is the Key ...

Buck expanded fishing knowledge to take advantage of underwater features the fish used in their movements throughout a lake, stream, or river. Buck used hydrographic maps to determine the most likely places to begin the search for fish in strange waters. He was the first to proclaim the cold front as the major obstacle to catching fish. He defined "structure" as a place on the bottom where a visible or pronounced change occurs, a bottom feature that is different from the surrounding bottom area. It could be a substrate change from soft to hard, or a change from shallow to deep, or a change from weedy to clear.

Before electronic depth sounders became available, Buck would map a lake by trolling Spoonplugs at precise depths, eliminating unproductive water to find the specific areas fish used in their day to day lives, regardless of the weather, the season, or the fish's feeding mood.

Today, fishermen and anglers around the world are fortunate. They do not have to research the basics of fish behavior. They do not need to worry on how to fish a specific fishing situation, or wonder if the fish will bite today.

Over the years, Buck put his knowledge on paper. First, he wrote "Spoonplugging ... Your Guide To Lunker Catches." This was followed by Buck's 9 volume Home Study Course that gives additional details on how to fish a variety of fishing situations regardless of the game species sought, or the type of water being fished.

Today, a core of dedicated Spoonpluggers make up the Spoonpluggers of America (SOA). SOA brings together Spoonpluggers from all areas as a means to fellowship, teach, perpetuate and keep pure the teachings of Buck Perry, which have now been proven for over 50 years.

And The Story Continues ...

Buck Perry started the modern era of freshwater sportfishing. He is the Father of Structure Fishing. And, he continues today to quietly refine the art and science of using fish knowledge to catch more fish. Of learning, regardless of the situation, how to be in the right place, at the right time, fishing in the right manner.

The National Fresh Water Fishing Hall of Fame enshrined Buck Perry, giving him their highest honor and the most prestigious award in all fishing.

-Adapted from the previously published, "He Started The Modern Era of Fishing" written by George Pazik, then Editor and Publisher of Fishing Facts magazine. Copyright 1997. All rights reserved.