Elwood Lake (Buck) Perry, 90, owner and retired President of Bucks Baits of Hickory, died at his residence in Taylorsville, NC, August 12, 2005 after a period of declining health.

Born July 10, 1915 in Hickory, he was a son of the late Robert M. and Ollie Jones Perry. He was a lifelong member of First Baptist Church of Hickory. 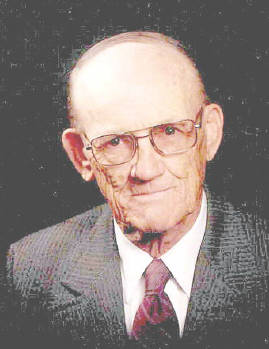 For three years following graduation he taught Math, Physics, and was assistant to Coach Scarborough at Hickory High School. In 1941, he moved to NC State University to study Mechanical Engineering and teach college labs. During this time he also taught naval officers the Mechanics of Diesel Operation and Maintenance and trained Machine Shop Operators for the war effort. He then moved to Army Transportation Corps, expediting construction, testing, delivery of tugs, barges, rescue vessels, etc, for the seven southeastern states. The latter part of war was spent on special assignment as a Lt. Colonel in the European Theater, Army Transportation Corps.

After the war, he left teaching and returned to Hickory to work with his father and brother in the Perry Armature Company until interests in sales, land development, oil exploration, manufacturing, travel and writing dissolved this association.

From an early age, he grew up hunting, and fishing with his father on Lake James. It was there he made the observations that would lay the groundwork for his pioneering theories on fishing. Over the years he came to believe that the "home" of the fish was deep water, and that once or twice a day, they became active and may move to shallower water. That they did not move in a haphazard manner, but the route they take has bottom features that show them the way. He designed a "tool" that would allow him to fish all depths, to find the fish and make them strike. This innovative lure had the combined action of a spoon and a plug. It was patented as the "Spoonplug", and in 1946 he and wife Marjorie, began manufacturing them in their garage on 9th Street. For the next 11 years, he worked all over the south, trying to sell his lures and the knowledge of how to find the fish and make them strike. He found few takers, as he was told, "we just don't fish that way!" He was featured in True and Sports Afield magazines, and became a friend to Ray Bergman and other well known outdoor writers of the day.

In 1954, airline pilot Don Nichols, discovered Spoonplugs while vacationing in Florida. He eventually talked Buck into coming to the Chicago area to promote them. In June of 1957, Tom McNalley, outdoor writer for the Chicago Tribune and Ray Gray for the Chicago American did feature stories in their Sunday Edition on Buck's exploits fishing Lake Marie, a supposedly "fished out" lake near Chicago, which set the fishing world on its ear. Then Tom McNalley edited the first Fisherman's Digest which featured the story of Spoonplugging. Thus began a number of years of promotions in Illinois, Wisconsin, and Michigan, teaching others to use his method of fishing. Later he would also work in Florida and California. In 1955, he built a new plant on US 64-70 which was enlarged over the years as he expanded into other endeavors. At one time he was manufacturing golf clubs, sleeping bags, fire alarms, and specialty furniture parts, in addition to his tackle items. He developed a non-stretch fishing line for casting and trolling, color-coded every 10 yards to show much line you were running. He worked on the first depth meter with Harry Lowarence and later built his own.

In 1971 his plant was gutted by fire from a lightening strike, destroying many of his films and papers. When he decided to rebuild, he only made the Spoonplug and related tackle items. The Spoonplug is still made today in 7 sizes and 35 colors. 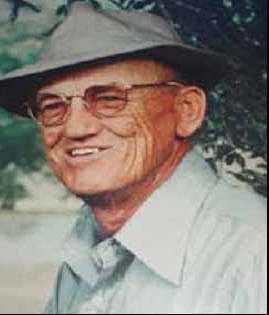 In collaboration with Tom Coleman, Jr. of Nashville TN, long time friend and business partner, he put together a 1500 acre tract of land near Nashville, to build a School of Structure Fishing and a Christian community to be called Spoonplugville, until his wife Marjorie's illness and subsequent death from ovarian cancer in 1978 took the heart out of him and he abandoned his plans.

He served as Education Editor for Fishing Facts Magazine for many years. The publisher, George Pazik, wrote in 1984 " He started the whole modern era of freshwater sport fishing. He is known as the Father of Structure Fishing. His discoveries and teachings have brought pleasure and success to millions of fishermen who never even heard his name."

Buck published "Spoonplugging, Your Guide to Lunker Catches" in 1973, acclaimed as "the only true textbook on fishing" and published his 9 Volume Home Study Series in 1981. His bi-monthly newsletter "The National Spoonplugger" is still being published today.

Over the years, he received many honors, a few being participation in President Eisenhower's "People to People" fishing tournament in 1966, the Honorary title of Kentucky Colonel in 1974, a 1979 Lenoir Rhyne Distinguished Alumnus in business. In April of 1984, he was inducted into the Freshwater Fishing Hall of Fame in Hayward, Wisconsin for his contributions to the sport of fishing and in October 1984, he was inducted into the Lenoir Rhyne Football Hall of Fame. In 1989, the Largemouth Bass in the Garden of Fishes at the Hayward museum was dedicated to Buck by friends and Spoonpluggers of America.

In addition to his parents, he was preceded in death by his wife of 39 years, Marjorie "Bud" Setzer Perry; his daughter Sharon Perry Smith; his sister, Kathryn Perry Johnson; and brother, Chester V Perry.

We wish to thank his faithful, loving caregiver, Cathy Blanton, for her devoted care; Hospice of Alexander County, Dr Trevor Craig, Dr William Smith, Dr Eller and Catawba Valley Medical Center for being there for us.

Memorials may be made to Hospice and Home Care of Taylorsville, 50 Lucy Echerd Ln., Taylorsville, NC 28681 or to the Alzheimer's Association, 260 1st Ave NW, Hickory, NC 28601 or to The Gideon International.